November 2016 e-Newsletter on the Trip of a Lifetime

Italy was the “trip of a lifetime!” I began in Rome, spending 5 days touring ancient sites that included the Pantheon, Coliseum, Trevi Fountain, Castle of the Angels, Piazza Navona and the Vatican. 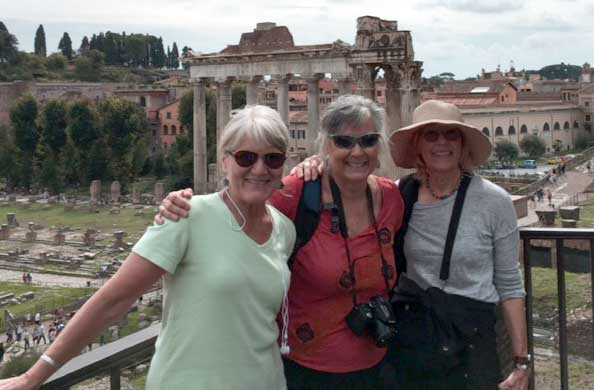 “If you advance confidently in the direction of your dreams, and endeavor to live the life you have imagined, you will meet with a success unexpected in common hours. You will pass an invisible boundary: new, universal and more liberal laws will begin to establish themselves around and within you an you will live the license of a higher order of beings.” – Henry David Thoreau

I began the driving (very intense) as we left Rome with my co-pilot navigating the GPS. We headed into the Umbria region, known as the “Green Belt” of Italy on account of its beautiful countrysides and old medieval villages nestling on the hill tops. We came to rest within the walls of San Gemini, a 1500’s medieval village that was in the midst of celebrating its annual medieval festival. Participants were dressed in vintage costumes with drummer playoffs, falconry, jousting on horseback and much more. We stayed in la Palazzo Santi Terzi, the palace of the village.

I remember frequently saying, “Pinch me, is this really happening?” We were cared for by our personal Italian chef who prepared phenomenal, daily, 6-course meals; anti-pasta first, then pasta, then meat and vegetable dishes, then the salad, finishing with a rich dessert – accompanied of course by a great table wine! However, it became brutal after 4 days, eating at 8pm and finishing by about 10 pm. Fortunately, the village festivities went on late into the night as did our “bootcamp leg training,” climbing the many stairs up and down the palace and the courtyard of the inner village.

From here, we went on to Assisi, the birthplace of St. Francis, founder of the Franciscan religious order in 1208 and St. Clare, founder of the Order of Poor Clares. We happened to arrive on the annual commemoration of his passing, 790 years ago! The tomb of St. Francis was like nothing I have ever experienced – to kneel and pray in the same spot where millions of pilgrims have traveled to pay homage and pray in honor of one of the most venerated religious figures in western history. To walk in the same footsteps, see his home, pray in his original church and the chapel where he received the stigmata during an apparition of angels in religious ecstasy was a blessing and an explanation of the intuitive attraction I have had for St. Francis and the words of his famous prayer throughout my life.

O, Divine Master, grant that I may not so much seek to be consoled as to console; to be understood as to understand; to be loved as to love; For it is in giving that we receive; it is in pardoning that we are pardoned; it is in dying that we are born again to eternal life.

In looking back, I believe the most profound experience I had was the “audience” with Pope Francis …even though I was numbered among 7,000 – 8,000 other friends who all received his blessing and prayers. Despite standing in a crowd, it was such a deeply, personal experience, one that will forever fill me with the transmission of his love and blessing. The Vatican, as well as St. Peter’s Basilica was jaw-dropping and quite humbling. To actually witness the works of the greatest masters of art – the paintings of Raphael, DaVinci’s Pieta (1497) and to experience Michelangelo’s monumental painting within the Sistine Chapel which took 25 years to complete – was simply awe-inspiring!

It was quite remarkable to begin in Rome and spend time with Pope Francis, who emulates St. Francis of Assisi’s ways of simplicity, compassion for one another, as well as for the Earth and all its Creatures and to end up in the home and birthplace of this great Saint who has had such a powerful influence upon the world which continues to this day.

As always, it is wonderful to travel and explore other cultures, sacred sites, historical places but nothing is better than returning home. I feel so blessed to be living in one of the most beautiful places in the world, living in this wonderful community. I am grateful beyond measure and thank everyone one you for being in my life!