I just returned from the World Parliament of Religions.  It was the first time in more than twenty years that the conference returned to the United States, bringing people of spirit and faith from around the world to beautiful Salt Lake City, Utah. 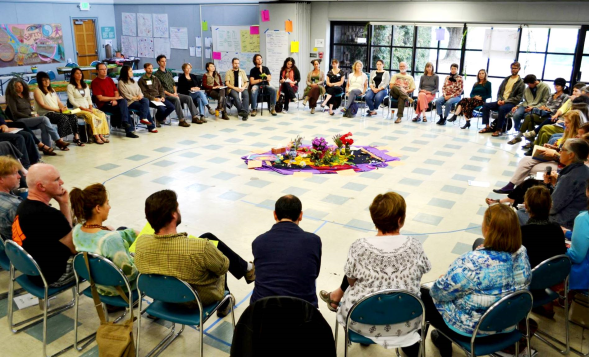 “Interreligious dialogue is about ideas and theology, but above all relationships. The tentative but deliberate initiative of the 1893 Parliament of the World’s Religions in Chicago to bring different religious traditions into direct contact was followed by uncountable meetings among followers of different religious traditions that have enriched minds and souls,” explains Katherine Marshall, Executive Director of the World Faiths Development Dialogue. “Over the decades such meetings have helped build the respect and friendships needed to lessen mystery and suspicions that keep people apart. Since 1993, Parliament meetings in different world regions have played special roles in religious history. These parliaments never aspired to classic parliamentary roles of legislation or representation. But they offered a special form of democratic expression: a place to talk, to learn, and to engage with others.”

At the most recent conference, ten thousand people from over 80 countries and 50 different religious and spiritual traditions came together to share, learn, network and celebrate. It was a spectacular and life changing experience where we focused on the commonalities rather than the differences in our religious beliefs. The Parliament is about bringing a message of hope in difficult times. Parliament Trustees explained why it is critical for people of all faiths to come together to address the challenges of climate and ecological degradation, and to learn and share with one another in the process of helping heal our planet.

“The Parliament’s keynote address spelled out clearly the destruction that humans have wrought upon the planet,” said Sarah Stockwell, “and this theme was echoed throughout the week. What better time for Earth-centered spiritual paths to enter the conversation.”

One of the overriding messages at the Parliament was the call for people of all religions to live their spiritual values in daily life and to work together to take inspired action to address climate change, racism, violent conflict and other global challenges.  We’re being called together to create a world that works for all, a thriving global family, united in a just, peaceful and sustainable future.

We came to a deep understanding that no matter our beliefs, we all agree that this Earth is our home,  we all share a common humanity and it is imperative that we work together to change the path that lies ahead. Unity is imperative!